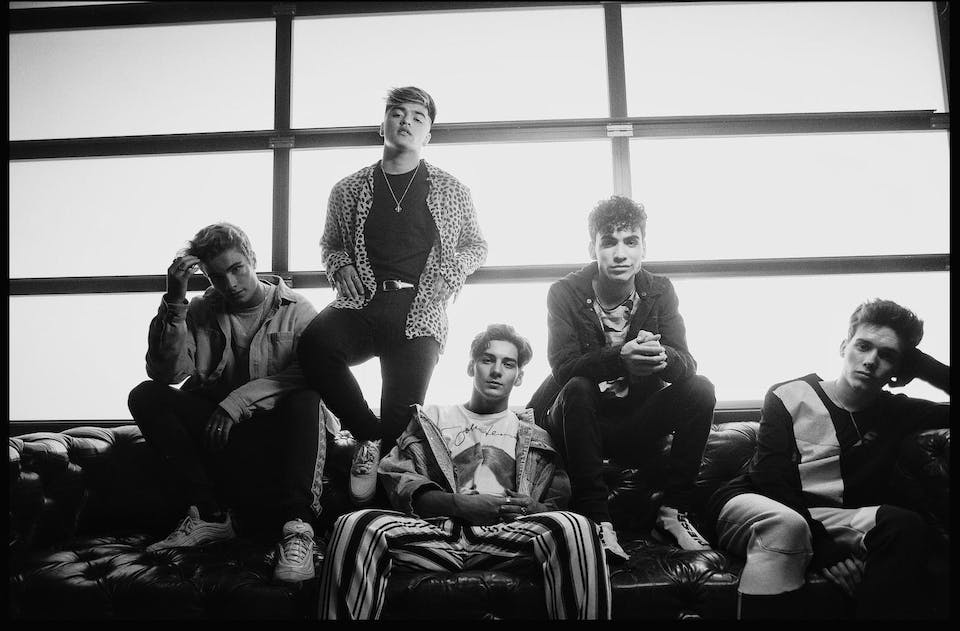 Hollywood Records proudly introduces America’s band, In Real Life, the only boy band in history voted together by America.

“This is something we’ve all been dreaming of for years,” says Sergio Calderon, one of the five young men culled from many hopefuls on ABC’s competition series Boy Band. “This” is, of course, the spotlight focused on previously unknown talents Sergio, Michael Conor, Chance Perez, Drew Ramos and Brady Tutton — already familiar to viewers of that show, and now poised for greater stardom as In Real Life.

As individuals, the members of In Real Life — whose percolating, empowering debut single, “Eyes Closed,” was an instant Top Ten hit on iTunes — have back stories as varied and impressive as their skills. Cleveland native Michael, 18, started playing violin at six and later became transfixed by the hip-hop grooves and rhymes of Jay Z, Eminem and Nas. When presented with the opportunity to audition for Boy Band, Michael was reluctant at first. “I thought that there hadn’t really been rappers in boy bands, and I couldn’t wrap my head around how that could work,” he says. “But once we started rehearsing, I saw how that could bring something fresh to the group.”

19-year-old Drew, in contrast, “always knew I wanted to be on a TV competition show,” he says. Growing up in the Bronx, the son of musical parents — his dad DJ’d, while his mom sang in church — Drew “loved watching American Idol and The X Factor; I’d stand in front of the mirror practicing my audition. I actually did audition for a couple of shows, but each time I’d freak out and freeze up. I’ve always been nervous performing in front of a camera, and you’ll see that in my audition for Boy Band too. But through the competition I was able to come out of my shell,” inspired by master showmen such as Bruno Mars, Michael Buble and John Legend.

California native Sergio, 16, also cites church singing and contemporary pop stars, among them Shawn Mendes and Charlie Puth, as influences. The son of Mexican immigrants, Sergio is also an accomplished soccer player whose athletic prowess drew the interest of college recruiters. “But I made the decision to stick to music while watching a One Direction video,” he recalls. “They were playing Wembley Stadium, and I got chills seeing them. I thought, ‘I’ve got to do this.’”

Chance, who’s 19 and also from California, began singing with his late father, “who would write songs that my sister and I would sing.” Chance left school and earned his GED after sophomore year to join a band with a contract; when the band broke up, he became a certified emergency medical technician and planned to eventually work as a firefighter to support his own now-two-year-old daughter, Brooklyn, who watched Boy Band faithfully, looking up from her toys whenever her dad was featured. “But now my dream is coming true, and I’ll hopefully be able to take care of (Brooklyn) financially,” says Chance, who lists as his musical heroes Michael Jackson and Justin Timberlake, as well as dad Albert Perez.

Brady, at 15, is the youngest member of In Real Life, though his resume hardly suggests inexperience. A classically trained singer who also listened to Adele, Ne-Yo, Luther Vandross and The Weeknd, Brady has worked professionally on TV and the stage, where his numerous credits include productions of The Sound of Music and Oliver! (in the title role). He was “a little skeptical” about fitting into a boy band “as a musical theater guy, so I spent weeks trying to get rid of my vibrato.” But acclaimed uberproducer Timbaland — one of the three “architects” who nurtured the contestants on Boy Band — advised him to keep it: “Timbaland liked that aspect, so it became about learning how to use it in the pop world.”

All the members of In Real Life cite the encouragement and advice offered by Boy Band’s host, singer Rita Ora and architects — Timbaland, Nick Carter and Emma Bunton, super producer and respective alumni of the Backstreet Boys and the Spice Girls — during the show’s vigorous selection process, which initially put 18 finalists in various assortments in search of the ideal group. “They’ve had a real impact on our lives,” says Chance. “I remember that Nick told us never to lose our hunger or become complacent, because we should always want to be better.”

Michael recalls Emma telling them “something that really stuck, which is that while you shouldn’t be afraid to stand up for what you believe in, group chemistry is really important and you have to make sure everyone is happy and getting along.”

Drew was touched by Timbaland’s similar “words of wisdom. He told me, ‘You’re not going to be able to do everything by yourself. You won’t be able to do as much without the creative team around you.’ I’m going to keep that with me, because these guys have really become my brothers.”

Boy Band’s structure, Drew adds, helped forge that fraternal bond: “It’s not like other competition shows, where there’s only one winner. We were put into groups where we could work together like buddies; there wasn’t hatred or drama, because our goal was to make it together.”

Brady notes, “There were times when we had to compete against each other on the show - where it looked like it would have to be me or Chance, or me or Drew. We’re happy that stage is over.”

Plans for the future include a holiday single — an original song, to be released later this year — and eventually an album, which will showcase the group as creative artists as well as performers. “We’re all writers,” Chance notes; Michael has been crafting songs and raps since he was 11, and says, “I’m definitely looking forward to being able to incorporate that element.”

For now, the bandmates are both savoring their victory and staying humble. “Not long ago I was busking on the subway to make a quick buck,” says Drew. “I was just this kid from the Bronx playing handball, and now I’m in Los Angeles with these guys, going to the VMAs. It’s surreal. But I know that now I have to work even harder than before, to keep on pushing forward.”