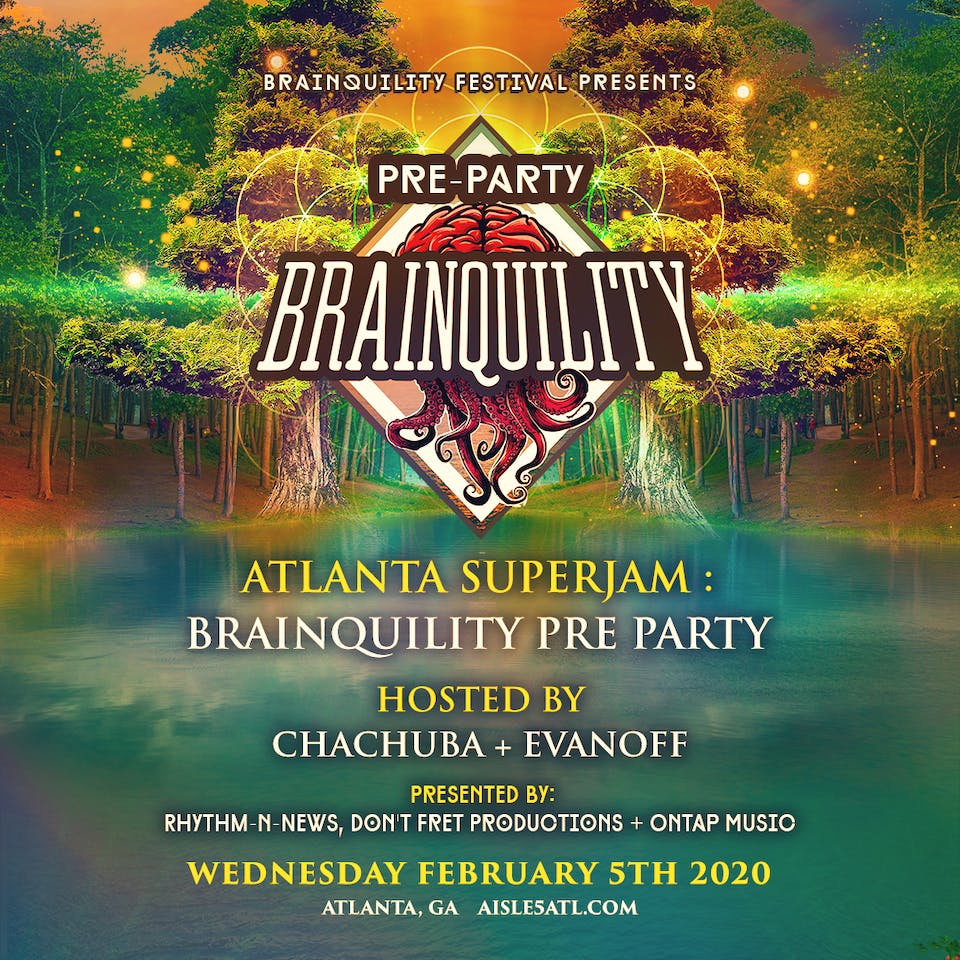 Rhythm-n-News is proud to announce the February 5th 2020 edition of the Atlanta SuperJam at Aisle 5 in Atlanta, GA! In partnership with Don't Fret Entertainment and OnTap Music, this particular SuperJam will serve as an Official Pre Party for Brainquility Music Festival, which will be held at Spirit of the Suwannee Music Park in Live Oak, FL, on February 6-8, 2020. This month's event will be hosted duelly by Chachuba from Chicago IL, and Evanoff from Denver, CO as they make their way down to the swamp on the "Road to Brainquility"

Chachuba is a four-piece band from Chicago, who flawlessly meld bold electronic elements with their improvisational, jazz-fusion backbone.

Greatly influenced by electronic dance music, Chachuba's large repertoire of original music is fueled heavily by melodic guitar riffs, trancey synths, and pulsating bass, that take listeners on a journey that could only be grounded by the beat of their own drums.

From the famous House of Blues Chicago to the State Bridge Amphitheater in Colorado, Chachuba has begun to spread their infectious music across the United States.

Evanoff is a guitar driven live-electronic trio and staple in the Colorado music scene. Defined by a bold live show exploring sonic possibilities, blending soaring guitar melodies and emotive electronic bass lines. Evanoff continues to be one of the most versatile and dynamic acts in the ever-evolving electronic music scene.

Denver based and Boulder born, live-electronic trio Evanoff is no doubt a force to be reckoned with in the Colorado music scene. The group has pioneered a unique, electrifying blend of analog and digital sounds they call “Dream Rock.” Dancey break beats, symphonic guitar riffs, powerful builds, and face melting jams define the increasingly popular genre.

Containing both heavy rock and soft melodic styles, the groups most stand out feature is their ability to capture the crowd’s attention while creating heartfelt tension accompanied by groovy dance beats that release